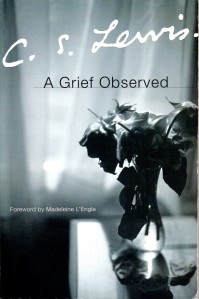 “All shall be well, and all shall be well, and all manner of thing shall be well,” so quotes Lewis (p 65) near the end of his published journal entries that relate to the loss of his wife, Helen.  (Lewis doesn’t give the author of the quote, but it’s from Julian of Norwich’s Revelation of [Divine] Love.)  When I finally got to reading this little book, I found it to be a gem of thought, writing, and emotion.  In it Lewis confronts God, then affirms His love for us—even if it’s like the tough love of a dentist or surgeon.  One of his stepsons (Douglas Gresham) wrote so aptly in the introduction:  “It is true to say that very few men could have written this book, and even truer to say that even fewer men would have written this book even if they could, fewer still would have published it even if they had written it (p xix).

Yes, indeed.  My response after reading entries in which Lewis describes his wife’s character was:  “What a guy!”  Lewis eulogizes, “H. [Helen] was a splendid thing; a soul straight, bright, and tempered like a sword” (p 42).  He adds later:  “I see I’ve described H. as being like a sword.  That’s true as far as it goes.  But utterly inadequate by itself, and misleading.  I ought to have balanced it.  I ought to have said, ‘but also like a garden.  Like a nest of gardens, wall within wall, hedge within hedge, more secret, more full of fragrant and fertile life, the further you entered.’  And then, of her, and every created thing I praise, I should say, ‘In some way, in its unique way, like Him who made it” (p 63).

At the beginning, in the first of only four chapters, Lewis asks, “Where is god?”  He likened God’s perceived absence during his desperation as a silence behind a door, which had been slammed in his face, and then bolted.  He struggled with this lack of comfort from God, writing that “the conclusion I dread is not ‘so there’s no God after all,’ but ‘so this is what God’s really like.  Deceive yourself no longer” (p 7).

Lewis is angry with God and tries to understand “goodness” in His terms.  He concludes that the real problem is his own shallowness of faith.  His faith is like a rope that didn’t bear him when needed, he claims, being just a “house of cards.”  He connects true faith with outwardness:  “If I had really cared, as I thought I did, about the sorrows of the world, I should not have been so overwhelmed when my own sorrow came.  It has been an imaginary faith . . .” (p 37).  Amazingly, this response to grief is coming from a man that many consider the greatest Christian apologist of the 20th century.

Being a great Christian thinker, Lewis couldn’t help but comment on consolations he received from various people.  He derides the feeble platitude, “She will live forever in [your] memory” (p 20, and negatively considers the ideas we hold of the dead being both joyous and brought immediately into God’s presence.  His commentaries relate to his desperate perplexity over Helen’s continued existence.  His prayers to God meet only silence; his questions to Him about Helen are unanswered.  Lewis felt that there was a “sort of invisible blanket between the world and me” (p 3), but this blanket appears to have enveloped his spiritual life as well.

A little over half-way through his journal, Lewis experienced not only a lifting of the blanket, but a strong sense that Helen was indeed “still a fact” (p 51).  When he stopped worrying about how much he remembered of her, she seemed to be, in a certain sense, everywhere.  His relationship with God began to reopen and he surmised that God had needed to show him what a flimsy house his faith really was.

He realized that he should have been praising God more, knowing that the act of praise brings joy.  He realized more fully that we need to love God, not our own ideas of Him, and to duplicate this in all our relationships.  He accepted that there are mysteries that will be solved only in heaven, and that “our apparently contradictory notions . . . will all be knocked from under our feet.  We shall see that there never was any problem” (p 71).

But Lewis leaves us with something that some people may find hard to accept:  an experience of Helen, her mind meeting his.  He says of it, “I had never in any mood imagined the dead as being so—well, so business-like.  Yet there was an extreme and cheerful intimacy.  An intimacy that had not passed through the senses or the emotions at all” (p 73).  He reports more of the encounter than this quote, of course, and analyzes it in relation to intellect, love, emotions, and the resurrection of the body.  As he himself concludes, “We cannot understand.  The best is perhaps what we understand the least” (p 75).

© Vicki Priest 2014 (this was moved from withchristianeyes.com; posted and revised since 2001)

A. J. Derxsen
Curriculum of the Spiritual Life