ice of a home in Orange County, CA, where we live is over $646,000 (the average for CA as a whole is over $345,000).  This simply floors me.  You cannot be low income and really live in this county, yet there are poor everywhere.  The gap between rich and poor is amazing.  There are homeless in the plazas I walk to, along the sidewalks and in McDonald’s (and there are a great many that hang out at the library a bit farther away) and some have died in these places recently.  I have more than they do, by far, and we are low income.  So what are all the wealthy here doing?  Surely many must be millionaires here for the average price of a home to be over half a million dollars.

I just got done looking over a property that we’re trying to buy through a low income housing project.  Only one unit is available, and it is farther away from where we work than I’d like . . . but seeing how the prices are only going up now, we should take it if we happen to be chosen to buy it.  Who knows how they decide that . . .  The average price for a home in the city in which it is in – though it is on the boarder of an even poorer city – is almost $426,000; if you can believe it, the average one year ago was over $100,000 less (hurrah for economic recovery???).  I think, honestly, that the price for the low income home we’re trying to get is too high.  I think the bank owns the whole property or something, and is asking “market value,” but providing loans that are not normally available.  I’ll find out tomorrow.

Anyway, I come to this after reading the short introductory chapters of A Place at the Table: 40 Days of Solidarity with the Poor (by Chris Seay).  Our church is using this book this Lenten season.  I don’t know why most nondenominational Christian churches do not emphasize fasting at all.  Some will talk about it and encourage people to do it, but this is somewhat rare from my experience.  The new church we’re going to is affiliated with the Evangelical Covenant Church denomination. It’s not Catholic-related by any means (they emphasize Christ’s church in the world, and de-emphasize themselves, more than any church I’ve attended), but they observe Lent.  Christ fasted for 40 days before His public ministry began, and He said that His followers would fast after he ascended, so I don’t know why we don’t emphasize it more.  Anyway, reading this book and considering its messages, is humbling.

It says in here that there are 2.2 billion children in the world – and guess how many live in poverty? – almost half, 1 billion.  Also, stunningly, a child dies every 15 seconds for lack of clean water to drink.  Drink clean water and thank God for all He gives us.  The book, and our church, suggest eating simply for Lent and giving the difference of what we would normally spend on our food to the poor.  I hadn’t thought about it much yet, but I’ll see what we come up with. 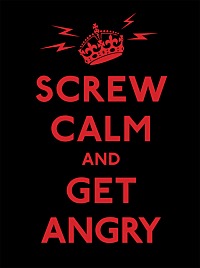 Screw Calm and Get Angry is a little chunky hardcover published by Andrews McMeel Publishing, LLC (Kansas City 2010).  Little chunky books are just so hard not to look into, to savor,  to roll in one’s hands like a lollipop in the mouth.  So yeah, I enjoyed it.

Even though this book isn’t new, I just saw it for the first time last month.  Here are some fun quotes from it, and don’t worry if you are offended by one, since you’ll find another you agree with (the quotes are from a whole range of political, religious, and philosophical views):

How fortunate for leaders that men do not think.  Adolf Hitler

We hang the petty thieves and appoint the great ones to public office.  Aesop

There may be times when we are powerless to prevent injustice, but there must never be a time when we fail to protest.  Elie Wiesel

Start off every day with a smile and get it over with.  W.C. Fields

The modern conservative is engaged in one of man’s oldest exercises in moral philosophy, that is, the search for a superior moral justification for selfishness.  J.K. Galbraith

Let us be grateful to the mirror for revealing to us our appearance only.  Samuel Butler

Nobody really cares if you’re miserable, so you might as well be happy.  Cynthia Nelms

In our civilization, and under our republican form of government, intelligence is so highly honored that it is rewarded by exemption from the cares of office.  Ambrose Bierce.

You can’t say civilization don’t advance . . . for in every war they kill you in a new way.  Will Rogers

I know God will not give me anything I can’t handle.  I just wish that he didn’t trust me so much.  Mother Teresa

If you wake up and you’re not in pain, you know you’re dead.  Russian proverb

Life is not so bad if you have plenty of luck, a good physique, and not too much imagination.  Christopher Isherwood

It is only by not paying one’s bills that one can hope to live in the memory of the commercial classes.  Oscar Wilde

The modern banking system manufactures money out of nothing.  Perhaps the most astounding piece of sleight-of-hand that was ever invented.  Banking was conceived in inequity and born in sin . . .  But if you want to continue to be slaves of the bankers and pay the cost of your own slavery, then let the bankers continue to create money and control credit.  Josiah Charles Stamp

Advertising may be described as the science of arresting the human intelligence long enough to get money from it.  Stephen Leacock

Criminal:  A person with predatory instincts who has not sufficient capital to form a corporation.  Howard Scott

Money:  There’s nothing in the world so demoralizing as money.  Sophocles

It is better to keep your mouth closed and let people think you are a fool than to open it and remove all doubt.  Mark Twain

That men do not learn very much from the lessons of history is the most important of all the lessons that history has to teach.  Aldous Huxley

A life spent in constant labor is a life wasted, save a  man be such a fool as to regard a fulsome obituary notice as ample reward.  Georgy Jean Nathan

I like work; it fascinates me.  I can sit and look at it for hours.  Jerome K. Jerome

Apparently, a democracy is a place where numerous elections are held at great cost without issues and with interchangeable candidates.  Gore Vidal

Politics is supposed to be the second-oldest profession.  I have come to realize that it bears a very close resemblance to the first.  Ronald Reagan

Politics, N[oun].  Strife of interests masquerading as a contest of principles.  The conduct of public affairs for private advantage.  Ambrose Bierce.

Only two things are infinite, the universe and human stupidity, and I’m not sure about the former.  Albert Einstein